Can The ATO Still Wind Up A Company If They’ve Paid Off Their Debt?

Unpaid tax debts can lead to serious consequences for businesses that are having problems keeping up with their tax debt. When it comes to enforcing debt, the ATO has a number of options, including pursuing wind-up proceedings in court.

While the ATO will not pursue the wind-up course of action if a company has repaid its debt or entered into an arrangement to repay by a given timeframe, businesses facing actions for unpaid tax debt should navigate this period carefully.

Companies facing the prospect of wind-up applications initiated by the ATO should act in a timely manner to understand their options, and pursue the best possible course of action.

When will the ATO pursue wind-up proceedings?

In recent years the ATO has been taking a harsher approach towards the issue of unpaid taxes by businesses, with more wind-up applications being filed in some courts. The ATO has also been quoted as describing its approach to unpaid tax debts as being ‘timelier and stronger’, in order to prevent businesses from getting an unfair advantage over others who pay on time. The ATO may be aggressively pursuing debts as low as $100,000, which suggests businesses that owe the ATO that much (or more) and don’t have a plan for repayment may be at higher risk of being the target of a wind-up action.

However as the ATO has pointed out, there are no monetary thresholds for pursuing a wind-up to recover tax debt – whether for GST, superannuation, PAYG, or other tax debt – and so if you have outstanding tax debt of any amount, you should treat it as a serious matter and take action sooner, rather than later. When deciding to recover debt through wind-up applications the ATO will consider everything from your asset position, as well as the type and size of debt to your future income, risk to revenue, and the possibility of liquidation.

This demand requires you to repay the full amount within 21 days, or enter into a payment agreement within that time period. If your company fails to fulfil one of these two options within the deadline, the ATO can then apply to the Federal Court to have your company wound up. A court hearing date will then be set, usually for around 21 to 28 days from the end of the first 21-day period. A liquidator will be appointed if the court decides your company should be wound up on hearing day. Your company assets will be sold off so the proceeds can be distributed to creditors, including the ATO.

But if you’ve complied with the statutory demand by either repaying the full amount or entering into an agreement to repay that’s agreeable to the ATO, and done so within the required timeframe, the ATO will not pursue wind-up proceedings.

What if the wind-up notice has already been filed?

The ATO’s position on pursuing tax debt appears to be a firm one, but keep in mind a wind-up notice is not necessarily the end of your company, even if it has been filed. While it’s always unwise to leave the situation unresolved until this stage, you still have time before the date of the hearing to fully repay your debt or negotiate with the ATO on an acceptable repayment plan. If you can show you can fulfil your debt obligations, it’s unlikely your company will be wound up. If for one reason or another you can’t make these payments, you will need to explore other options.

One important thing to remember is once the wind-up notice is filed by the ATO your options are much more limited. For example, you won’t be able to start a creditors’ voluntary liquidation, though you can still pursue voluntary administration. The ATO might be willing to consider a genuine attempt to enter into a Deed of Company Arrangement, so as to give your company the best chance of continuing with business, and/or creditors get the best possible outcome. However, it has to be shown there’s a real possibility voluntary administration will deliver results for the company and creditors, or the court might rule for the wind-up to go ahead anyway.

When will the ATO consider settlement?

As a general rule of thumb, the ATO will opt to settle disputes relating to tax or superannuation debts if the costs of continuing exceed the benefits. These costs can include internal and external legal costs, the costs and risks of collecting the debt from your company, your company’s financial position and the position of any related entities, and what it would mean to be effective and efficient in using the ATO’s resources.

The ATO will also consider any future compliance issues, whether there are any contentious points of law, and whether it’s in the public interest to litigate. If a company has avoided compliance by behaving in a certain way, and the ATO thinks there’s a need to send a strong message, then it might well choose not to settle.

The importance of acting quickly

In summary, the ATO will generally not wind up a company on the grounds of unpaid tax debt if the company pays the debt, or enters into an acceptable repayment settlement within the required timeframes when a statutory demand has been served, and/or when a wind-up notice has been filed.

However, it’s critical to always act quickly when you have outstanding tax debt, you’ve received a wind-up notice, or issued a statutory demand. If in this situation, consult an insolvency expert to explore all your options so you can have the best possible chance of fulfilling your debt obligations and continuing to operating your business. 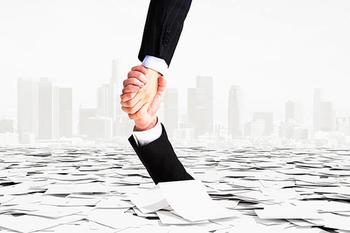 10 Signs Your Business is in Trouble

Not every business endeavour is a straight path to success, and even some of the most successful ventures of all time have had periods where ends barely meet, or the future of the company might be in jeopardy.

The Importance of Finance Management: Why Your Business Needs an Accountant

Many businesses, especially smaller businesses, aren’t committed to consulting their accountant on a regular basis. This can turn out to be a costly error over the longer time when in fact a trusted and competent accountant helps you understand what’s happening in your business.